How I automated slick schema code generation? by Maciek Opała

What has been your experience of using Slick for Scala?

Senior Software Engineer at SoftwareMill, Maciek Opała kept slick’s schema generated code in a separate project but with this use of a plugin, Maciek has made beneficial changes. Let's find out more!

'In a legacy project I work on, for performance reasons — mainly IDE-related — we keep the slick’s schema generated code in a separate project. It is published as a jar file to a Nexus repository and added as a dependency to other modules. Before automation, publishing the artifact was like running on a mine field. Let’s see what changes I introduced. Before the optimisation, generating a new schema and publishing it to a repository, required the following steps: 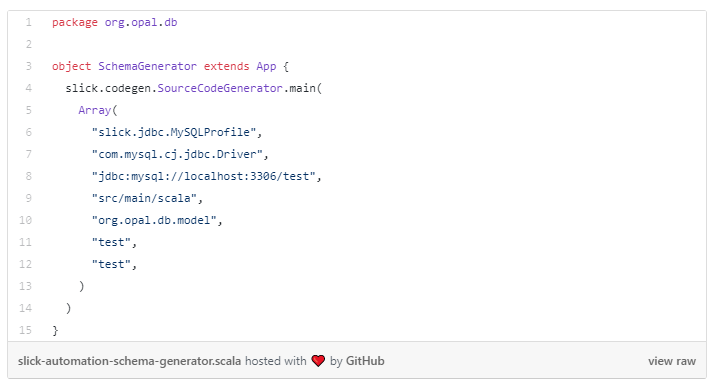 Phew… Do I really have to explain why this is an error prone process which, in addition, is far from the standards that we have for development and devops in the 21st century? Maybe, just three: commenting/uncommenting, stashing and popping, being scared all the time…

This idea was like providing a totally new quality, but after a while I thought: “I still can do better”.

Now, instead of commenting/uncommenting I’ve added the following piece of code:

With it, I even have the possibility to change the DB credentials without modifying the script itself — OCP, sounds familiar?

When it comes to adding 'SchemaGenerator', then excluding it, adding dependencies which will not be published — thanks to 'pomPostProcessor' — and.. What else do I need to automate artefact publishing? Instead of all this code I can use just a single plugin: slick codegen and configure it:

You may find establishing a dependency that will run code generation before compilation of the sources useful. You can do this with single line, by adding 'sourceGenerators in Compile += slickCodegen' in your 'build.sbt'. In my particular case, I didn’t need this feature. I have a slightly different flow: first apply migration, then code generation and commit. Artifact is published on the CI server, so no compilation is done locally.

No code to maintain, clean 'build.sbt', no redundant dependencies, no steps to remember, no fear — finally! Just two simple steps:

Automate all the things! Do you know any other plugins that help to automate your day-to-day work? Share them!

The sample project can be found here.'

This article was written by Maciek Opała and posted originally on SoftwareMill Blog.