There is another reason why GraalVM is awesome!

Have you ever tried to dockerize a simple application with an image? If yes you will know the trouble but that is where GraalVM can help and Founder of SoftwareMill, Adam Warski is here to tell us how. Check out his blog on native-image to gain small and fast Docker images.

'The JVM ecosystem has a lot of great traits, but small, cloud-deployment-friendly Docker images is not one of them. Dockerizing even a simple application will result in an image that has hundreds of megabytes, as it needs to contain all dependencies ('jar's) and the whole JVM. Can we do anything about it?

Turns out we can! GraalVM (recently released), apart from the new JIT compiler and polyglot support, also contains the 'native-image' utility. As the name suggests, it can be used to build native images of applications, given a set of input jars and an entry class.

Such an image is a stand-alone executable, which contains a “partial” virtual machine, SubstrateVM. SubstrateVM includes only some components of a full JVM, such as thread scheduling and the garbage collector. However, many functionalities are left out: for example classes cannot be loaded dynamically, there’s no security manager, etc.

We can use 'native-image' to build a Docker image containing our application, which will not only be much more compact, but also starts faster. The basic idea is simple:

The docker image from step 3, apart from the executable application, only needs a very basic linux installation. No other dependencies are required, not even a JRE— everything’s included in the binary. Hence, a good candidate for the base image is alpine, which weights only 5MB.

That all sounds too good to be true! Yes, there are gotchas:

Let’s look at an example! We’ll take a “Hello, world!” application, but complicate it a bit so that it’s not completely trivial: we’ll print the greeting from a background thread. For that, we’ll use the Monix library, which transitively pulls a couple of dependencies: 'reactive-streams', 'cats-core', 'monix-eval', and so on. As a result, we’ll get a bunch of jars on the classpath.

Here’s the whole code of our application (all of the code is available on GitHub):

When you run it, you should see two greetings, one from the background thread ('task.start' starts an asynchronously executing process), and the other from the main thread (as in line 9 we are evaluating 'task' directly as well):

Let’s first build a “traditional” Docker image. We’ll use sbt-native-packager and the default configuration. In sbt, this is:

There’s definitely room to improve! Now, let’s try doing the same using native-image. The first obstacle is that we can’t build the native image on the host machine, as in my case it’s macOS, and binaries built on macOS won’t run on alpine linux, or any other linux. Welcome to the native binaries world!

To solve this problem, we’ll have to build the native image in a host-system-agnostic way. We can use Docker for that, and build the native binary in a docker container! But first, we’ll need a container with GraalVM and 'native-image' installed. Here’s the Dockerfile:

And here’s the pseudo-command that we need to run, to build the native image:

We’re mounting two volumes. The first should contain all the jars that our application depends on (mapped to '/opt/cp'), including the jar with the application itself. The second is a directory, to which the created native image will be written ('/opt/graalvm').

Note: we’re using '--static', so that all glibc references are statically linked, as alpine contains a different glibc implementation than the one supported by GraalVM.

To automate the process, we’ll need to do some sbt/Scala programming! We’ll create a new task which, when run, will build the container with the native image:

In the task implementation, we need to first create a directory containing all the dependency jars, and obtain the name of the main class: 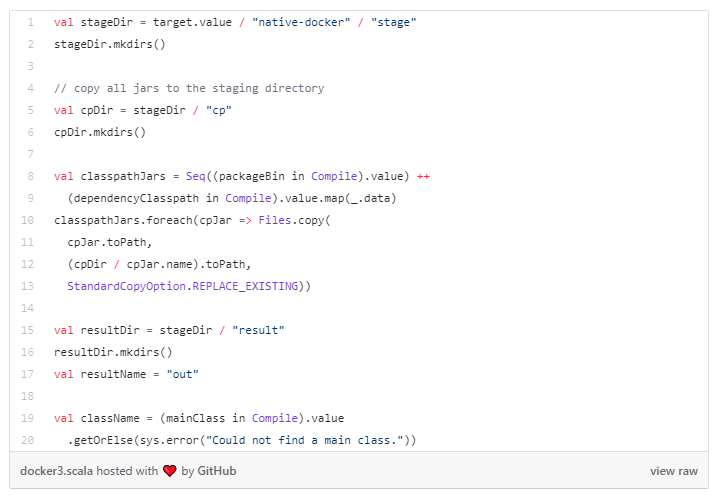 Then, we construct the command itself and start the container, which will build the native image:

Finally, we create the docker image which will contain the native image binary. It will be based on the following Dockerfile:

To build the image, we need to provide the 'out' file, which should be the binary built by the container before. We once again invoke the 'docker' command: 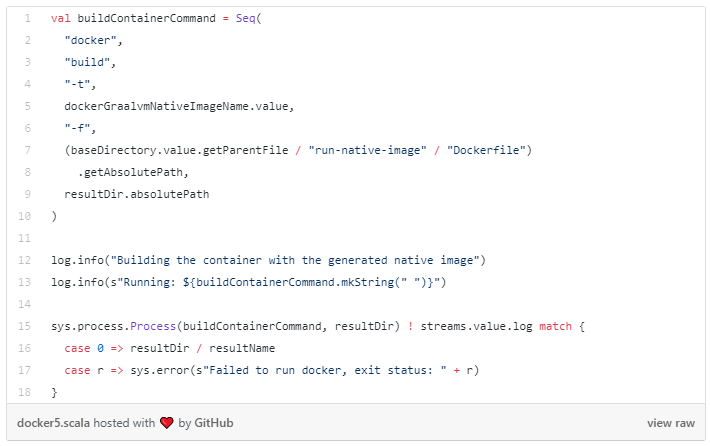 It took a while, but now we have an image that is an order of magnitude smaller in size, and twice as fast to run:

The 1.2 seconds the application takes to run is almost purely Docker overhead. The binary itself runs almost instantly (try it — build a native image locally and run it directly!), but here we also need to start the container, execute it and clean up afterwards.

Summing up, we’ve reduced the size of the docker image from 647MB to 26.5MB, and decreased the time it takes our application to run from 2.2s to 1.2s, which is the overhead imposed by Docker. Building the image takes some time and brings with it some restrictions on the JVM features that we might use: anything that dynamically manipulates the bytecode, scans the classpath or inspects classes using reflection, will be problematic.

Luckily, it’s usually a good idea to avoid reflection and classpath scanning anyway — and applications written using Scala and Scala libraries rarely rely on it. Instead, Scala applications use compile-time mechanisms, which not only have better runtime performance, but also provide better type-safety and detect problems earlier. For Java, frameworks need to be adapted, and the build process further customised. Quarkus is one of the efforts in that direction.

If you’d like to experiment with the above, all of the code is available on GitHub. Enjoy!'