We know that effect type is very powerful and gives us the ability to do a lot! However, what else do we know about this? And what is the principle of abstraction?

Scala Software Engineer, Marco Lopes gives us the insight we need to abstract over effect types so make sure you have a read of this article.

'In the previous chapter we talked about effects, how to use them, and what are they useful for. We chose one of the available effect types, and saw that we can do all kinds of things with it. We can map or flatmap over it, and this is what makes them composable, otherwise their usefulness would be very limited. We can use it to suspend side effects. We can use it to lift pure computations into the effect type so that we can compose those computations with effectful ones. We can even use it to run the so called “unsafe” operations and force the side effects to happen making our code not pure.

On one hand, our effect type is extremely powerful and often allows us to do a lot more than we need, or even desire to make possible in certain parts of the code. On the other hand, it is also “closed”, in the functionality that it carries with it. In the case of our example, we were stuck with whatever functionality 'cats.effect.IO' provides, and that’s it. 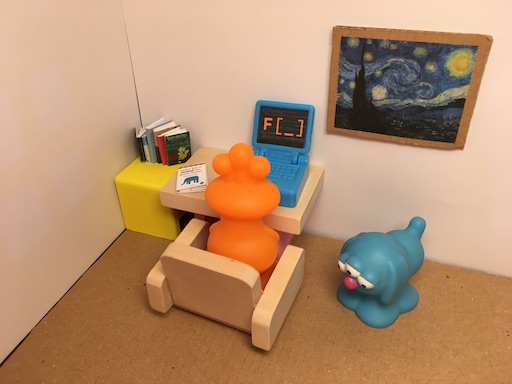 Principle of the Least Powerful Abstraction

There are several benefits to constraining the power of an abstraction in a specific scope. The first one being that it makes intentions explicit, if I write a function that takes a 'Functor', you know by this information alone that it can only 'map', because 'Functor' is an abstraction to which the information you have about it, is that it provides 'map'. If I write one that takes an 'IO', you can tell nothing about it, because 'IO' is a specific implementation that allows you to do anything. The other major benefit is that it also leaves less scope for us to shoot ourselves in the foot, using the 'Functor' example again, you can’t run any of the 'unsafe*' methods on 'Functor' but you can with 'IO'.

An example that might ring with more developers is transforming a list using 'map' vs transforming a list using a 'foreach' loop. Using 'map', the only thing you can to is apply a function to each element of the list, and you will get a list of the same length with the result of the function applied to each element of that list. 'foreach' on the other hand, is infinitely more powerful, there’s virtually no limits to what you can do with it, leaving you in a situation where it’s not immediately clear what the code does, and where there’s a lot more room to introduce bugs.

So where does this leaves us? Why am I comparing 'IO' with something called 'Functor' and what is even this 'Functor' that we’re talking about? 1

We’ve talked about type parameters before, and at the time, we kept them completely generic, for example, we mentioned 'Option[A]'. What do we know about 'A'? We know absolutely nothing about it, right? Let’s say we were implementing 'map' for 'Option', what could we do with value of type 'A'? Since we know nothing about 'A', we certainly can’t call methods on it, and since 'map' takes a function from 'A -> B', that’s basically all that we can do, apply that function to the value of type 'A' to get a 'B'. So, 'A' is completely polymorphic, it can be replaced by any type, but that also means that there’s very little you can do with it (not necessarily a bad thing though).

The intuition for a type class can be, in my opinion, better explained by comparison to inheritance. In inheritance, a type is polymorphic by introducing a “is a” relationship. You create a class (in the OO sense of the word, not in the type class sense of the word), and during its declaration you say that this class is a something. Ex: 'class Cat extends Mammal', you say 'Cat' is a 'Mammal'. This is early binding polymorphism, as the relationship is defined at declaration time, once the class has been declared, you can’t say that it is anything more. With type classes the relationship is “has a”, so it’s late binding, the type is defined without knowledge of the type class, and an instance of the type class is provided at any point, and as long as there’s an instance in scope (the type has a), then the functionality provided by the type class is available for this type. So if there is a type class 'Mammal', and a type 'Cat', in Scala you would declare an instance of 'Mammal[Cat]' and having it in scope means that 'Cat' has a 'Mammal' instance.

Back to the above example of 'Functor' and 'IO', 'Functor' is a type class, and, in the 'cats' ecosystem, there is an instance of 'Functor' for 'IO'.

We talked about type parameters and type classes, but we haven’t looked into how they’re used together yet. Let’s do that now.

If we have a type class 'MyTypeClass', and we have some type 'MyType' parameterised on 'A', 'MyType[A]', we can constrain 'A' to be a type that has to have an instance of 'MyTypeClass' available in the scope where 'MyType' is used by declaring it like this 'MyType[A: MyTypeClasss]'. And now, we know that 'A' supports whatever functionality 'MyTypeClass' provides. So 'A' is less polymorphic that the 'A' in 'Option', but it also means that by making it less polymorphic, there’s more we know about it and more we can do with it 3.

So, if we have 'MyType[F[_]]', we can now constrain it to a type class, like 'Functor', so that we end up with something like 'MyType[F[_]: Functor]'. Now, since 'IO' is a higher kinded type, and it has an instance of 'Functor', we can pass 'IO' to 'MyType'. Inside of the abstraction encapsulated by 'MyType', we don’t know that it is being used with 'IO', and it might as well be used with something else, and we are now also limited to calling the functionality of 'Functor' inside of it, so we can’t suspend side effects or run the unsafe methods on it. We also know these things just by looking at the signature of 'MyType' and we can be sure that it won’t do more than map over our 'IO' (or whatever other type with an instance of 'Functor' we pass to it).

A breakdown of the type class hierarchy in cats can be found in the documentation, here and the most common ones to depend on when dealing with effect types will likely be 'Functor', 'Applicative', 'ApplicativeError', 'Monad', 'MonadError', and 'Sync', in order from the least to the most powerful.

This is what it means when people say that they write an application in 'F', it means that at the entry point of your application you instantiate a concrete effect type, but from that point on, everything relies on a less powerful abstraction, preferably an unconstrained 'F[_]', but more often than not, an 'F[_]' that requires one of the above mentioned type classes.

In the beginning we’ve mentioned that by tying ourselves to 'IO', we were also limiting the functionality that we had at our disposal, and yet none of what we talked about in here addresses that. Because this chapter is getting a bit long, we’re going to address this in the next chapter.

In the next chapter we’re going to discuss the advantages and disadvantages of adding functionality to 'F[_]' using MTL style and type classes.'