This is a great series of blogs from Marko Švaljek reagrding Stream Processing With Spring, Kafka, Spark and Cassandra, stay tuned for the rest of the series througout the week! This is Part 1 and Part 2.

Before starting any project I like to make a few drawings, just to keep everything in perspective. My main motivation for this series is to get better acquainted wit Apache Kafka. I just didn't have a chance to use it on some of the projects that I work on in my day to day life, but it's this new technology everybody is buzzing about so I wanted to give it a try. One other thing is that I also didn't get a chance to write Spark Streaming applications, so why not hit two birds with one stone? Here is 10 000 feet overview of the series: 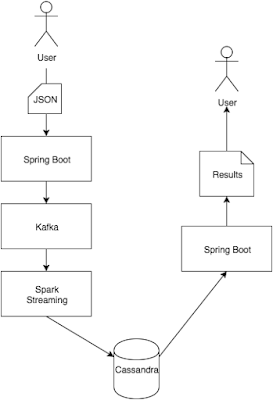 Avoiding the tl;dr
Part of the motivation for splitting is in avoiding the tl;dr effect ;) Now, let's get back to the overview. We'll break down previous image box by box.

We're basically just prototyping here, but to keep everything flexible and in the spirit of the newer architectural paradigms like Microservices the post will be split in 5 parts. The software will also be split so we won't use any specific container for our applications we'll just go with Spring Boot. In the posts we won't go much over the basic, you can always look it up in the official documentation.

This is the reason why I'm doing this in the first place. It's this new super cool messaging system that all the big players are using and I want to learn how to put it to everyday use.

For some time now I'm doing a lot of stuff with Apache Spark. But somehow I didn't get a chance to look into streaming a little bit better.

What this series is about?

It's a year where everybody is talking about voting ... literary everywhere :) so let's make a voting app. In essence it will be a basic word count in the stream. But let's give some context to it while we're at it. We won't do anything complicated or useful. Basically the end result will be total count of token occurrence in the stream. We'll also break a lot of best practices in data modeling etc. in this series.

Series is for people oriented toward learning something new. I guess experienced and battle proven readers will find a ton of flaws in the concept but again most of them are deliberate. One thing I sometimes avoid in my posts is including source code. My opinion is that a lot more remains remembered and learners feel much more comfortable when faced with problems in practice. So I'll just copy paste crucial code parts. One more assumption from my side will be that the readers will be using IntelliJ IDEA. Let's got to Part 2 and see how to setup kafka.

In this section we'll setup two kafka brokers. We'll also need a zookeeper. If you are reading this my guess is that you don't have one setup already so we'll use the one bundled with kafka. We won't cover everything here. Do read the official documentation for more in depth understanding.

Go into directory where you downloaded and extracted your kafka installation. There is a properties file template and we are going to use properties files to start the brokers. Make two copies of the file:

Now use your favorite editor to make changes to broker configuration files. I'll just use vi, after all it has been around for 40 years :)

Now make changes (check if they are set) to following properties:

Make the changes for the second node too:

First you need to start the zookeeper, it will be used to store the offsets for topics. There are more advanced versions of using where you don't need it but for someone just starting out it's much easier to use zookeeper bundled with the downloaded kafka. I recommend opening one shell tab where you can hold all of the running processes. We didn't make any changes to the zookeeper properties, they are just fine for our example:

From the output you'll notice it started a zookeeper on default port 2181. You can try telnet to this port on localhost just to check if everything is running fine. Now we'll start two kafka brokers:

Before producing and consuming messages we need to create a topic for now you can think of it as of queue name. We need to give a reference to the zookeeper. We'll name a topic "votes", topic will have 2 partitions and a replication factor of 2. Please read the official documentation for further explanation. You'll see additional output coming from broker logs because we are running the examples in the background.

Open two additional shell tabs and position yourself in the directory where you installed kafka. We'll use one tab to produce messages. And second tab will consume the topic and will simply print out the stuff that we typed in in the first tab. Now this might be a bit funny, but imagine you are actually using kafka already!

In tab for producing messages run:

In tab for consuming messages run:

This article was written by Marko Švaljek and originally posted onto msvaljek.blogspot.com