Futures Made Easy with Scala by Martin Budi

Need to know the basics of Future?

Software Engineer, Martin Utama knows that modern applications are complex and can be difficult to compose, but he is here to help us understand. Don't worry if you're not a Scala programmer, you'll still enjoy this read.

'Future is an abstraction to represent the completion of an asynchronous operation. Today it is commonly used in popular languages from Java to Dart. However, as modern applications are becoming more complex, composing them is also becoming more difficult. Scala utilizes a functional approach that makes it easy to visualize and construct Future composition.

This article aims to explain the basics in a pragmatic way. No jargon, no foreign terminology. You don’t even have to be a Scala programmer (yet). All you need to have is some understanding of a couple of higher-order functions: map and foreach. So let’s get started.

In Scala, a future can be created as simple as this:

That’s all there is. We just ran a future using 'foreach', manipulated the result a bit, and printed it to the console.

But how is it possible? So we normally associate foreach and map with collections: we unwrap the content and tinker with it. If you look at it, it’s conceptually similar to a future in the way we want to unwrap the output from 'Future{}' and manipulate it. To have this happen the future needs to be completed first, hence “running” it. This is the reasoning behind the functional composition of Scala Future.

In realistic applications, we want to coordinate not just one but several futures at once. A particular challenge is how to arrange them to run sequentially or simultaneously.

When several futures start one after another like a relay race we call it sequential run. A typical solution would simply be placing a task in the previous task’s callback, a technique known as chaining. The concept is correct but it doesn’t look pretty.

In Scala, we can use for-comprehension to help us abstract it. To see how it looks, let’s just go straight to an example. 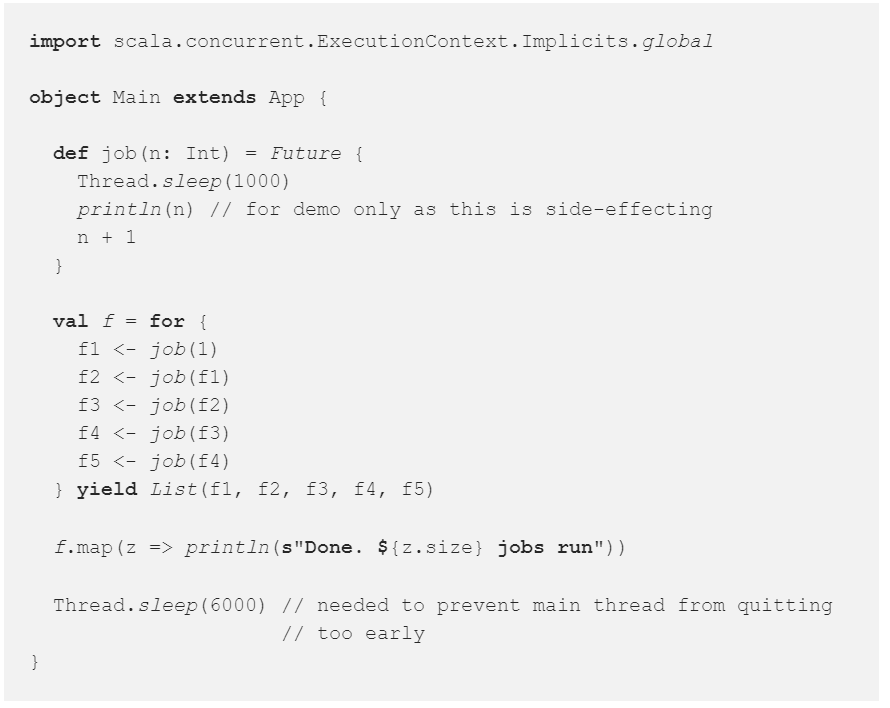 The first thing to do is importing ExecutionContext whose role is to manage thread pool. Without it, our future will not run.

Next, we define our “big job” which simply waits for a second and returns its input incremented by one.

Then we have our for-comprehension block. In this structure, each line inside assigns a job’s result to a value with '<-' which will then be available for any subsequent futures. We have arranged our jobs so that except for the first one, each one takes in the output of the previous job.

Also, note that the result of a for-comprehension is also a future with output determined by yield. After the execution, the result will be available inside 'map'. For our purpose, we simply put all the jobs’ outputs in a list and take its size.

We can see the five futures fired one-by-one. It is important to note that this arrangement should only be used when the future is dependent on the previous future.

If the futures are independent of each other then they should be fired simultaneously. For this purpose, we’re going to use Future.sequence. The name is a bit confusing, but in principle it simply takes a list of futures and transforms it into a future of list. The evaluation, however, is done asynchronously.

Let’s create an example of mixed sequential and parallel futures.

Future.sequence takes a list of futures that we wish to run simultaneously. So here we have f2 and f4 containing two parallel jobs. As the argument fed into Future.sequence is a list, the result is also a list. In a realistic application, the results may be combined for further computation. Here we’ll take the first element from each list with '.head' then pass it to f3 and f5 respectively.

Let’s see it in action:

We can see the jobs in 2 and 4 fired simultaneously indicating successful parallelism. It is worth noting that parallel execution is not always guaranteed since it depends on available threads. If there are not enough threads then only some of the jobs will run in parallel. The others, however, will wait until some more threads are freed.

Scala Future incorporates recover that acts as a back-up future when an error occurs. This allows the future composition to finish even with failures. To illustrate, consider this code:

Of course, this will not work, as “abc” is not an int. With recover, we can salvage it by passing a default value. Let’s try passing a zero:

Now the code will run and produce one as a result. In composition, we can fine-tune each future like this to make sure the process won’t fail.

However, there are also times when we want to reject errors explicitly. For this purpose, we can use Future.succesful and Future.failed to signal validation result. And if we don’t care about individual failure we can position recover to catch any error inside the composition.

Let’s work another bit of code using for-comprehension that checks if the input is a valid int and lower than 100. Future.failed and Future.successful are both futures so we don’t need to wrap it in one. Future.failed in particular requires a Throwable so we’re going to create a custom one for input larger than 100. After putting it all up together we would have as follows: 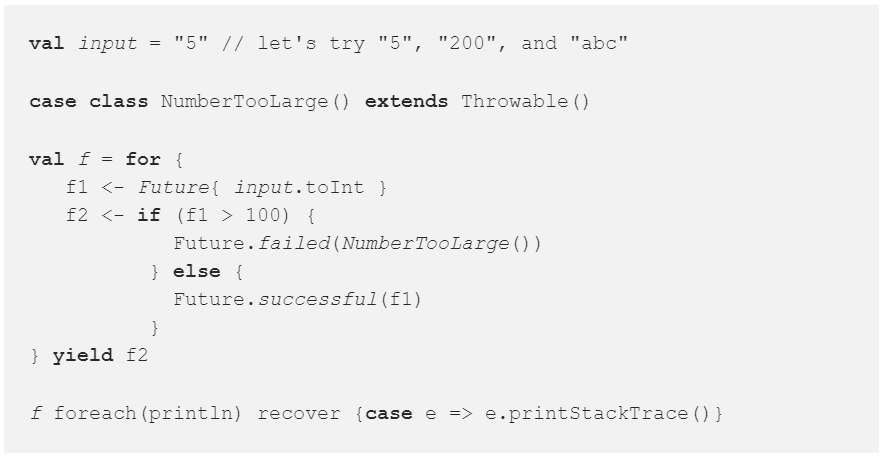 Notice the positioning of recover. With this configuration, it will simply intercept any error occurring inside the block. Let’s test it with several different inputs “5”, “200”, and “abc”:

“5” reached the end no problem. “200” and “abc” arrived in recover. Now, what if we want to handle each error separately? This is where pattern matching comes into play. Expanding the recover block, we can have something like this:

You might probably have guessed it but an all-or-nothing scenario like this is commonly used in public APIs. Such service wouldn’t process invalid input but needs to return a message to inform the client what they did wrong. By separating exceptions, we can pass a custom message for each error. If you like to build such service (with a very fast web framework), head over to my Vert.x article.

The world outside Scala

We have talked a lot about how easy Scala Future is. But is it really? To answer it we need to look at how it’s done in other languages. Arguably the closest language to Scala is Java as both operate on JVM. Furthermore, Java 8 has introduced Concurrency API with CompletableFuture which is also able to chain futures. Let’s rework the first sequence example with it. That’s sure a lot of stuff. And to code this I had to look up supplyAsync andthenApply among so many methods in the documentation. And even if I know all these methods, they can only be used within the context of the API.

On the other hand, Scala Future is not based on API or external libraries but a functional programming concept that is also used in other aspects of Scala. So with an initial investment in covering the fundamentals, you can reap the reward of less overhead and higher flexibility.

That’s all for the basics. There’s more to Scala Future but what we have here has covered enough ground to build real-life applications. If you like to read more about Future or Scala, in general, I’d recommend Alvin Alexander tutorials, AllAboutScala, and Sujit Kamthe’s article that offers easy to grasp explanations.'
This article was written by Martin Utama and posted originally on Medium.